All Java programs can be classified as Applications and Applets. The striking differences are that applications contain main() method where as applets do not. One more is, applications can be executed at DOS prompt and applets in a browser. We can say, an applet is an Internet application. [Source]

Concatenate meas to to link together; unite in a series or chain.

Not to subtract. But to add to the end of something. ie concatenate 1 with 1 = 11

A class can contain constructors that, when invoked, make objects according to the class “blueprints”. So a constructor declaration looks like a method declaration, but constructors use the name of their class and have no return type. An example of a constructor (with arguments) is down below:

To make a new object you invoke the constructor with the new operator:

No Args constructor mean literally that there are no “arguments” or anything in the constructor itself. Let me show you:

Notice that int startCadence, int startSpeed, and startGear are all arguments in the Bicycle constructor.

Notice that there isn’t any arguments in between the parenthesis ().

What does it mean to be immutable in Java?

Immutable means that once the constructor for an object has completed the execution, that instance of an object can not be altered.

This is useful because it means that you can pass a reference to the object without worrying that something else is going to change it contents. This is especially useful when you are dealing with concurrency, so that there are no locking issues given that immutable objects never change.

Foo doesn’t have to worry that the caller to getValue() might change the text in the string.

If you imagine a similar class to Foo, but with a StringBuilder rather than a String as a member, you can see that a caller to getValue() would be able to alter the StringBuilder attribute of a Foo instance. [Source]

How do you make something Immutable?

The following rules define a simple strategy for making immutable objects. Note that not all classes documented as “immutable” follow these rules.

Logical immutability means that its behavior will never change, i.e. that you can’t notice any changes from the outside. For example, when you have an immutable square matrix, and you have to compute it’s determinant, then you might want to store that result for further method calls because computing the determinant is pretty expensive. This is not bit-wise immutable, as you’ll store the determinant only when it’s requested for the first time, but other than performance it can’t be observed from the outside. [Source]

For variables, Initializing means to assigning a value to a variable for the first time. This can happen either immediately as the variable is made or as some point in the future.

In a broader sense, initializing is setting up a starting state. In other words, preparing something for use. This can be something as small as a variable, which must be assigned a value before it can be used. For objects, giving them some initial value, or even your entire program might need to do some setup when it starts. [Source]

Initialization Vs Declaration Vs Assignment

Assignment: throwing away the old value of a variable and replacing it with a new one

Initialization: it’s a special kind of assignment: the first. Before initialization objects have null value and primitive types have default values such as 0 or false. Can be done in conjunction with declaration.

Declaration: a declaration states the type of a variable, along with its name. A variable can be declared only once. It is used by the compiler to help programmers avoid mistakes such as assigning string values to integer variables. Before reading or assigning a variable, that variable must have been declared.

Note that a method returns to the code that invoked it when it completes running through all statements in the method, reaches the return statement or throws an exception (?). Which ever one of these 3 that occurs first.

So in the body of the method, you can use the return statement to return a value. [Source]

What does the return keyword do in a void method in Java?

At that point, it makes Java exit the method. Once the return statement is executed, the rest of the code will not be executed.

For example, the youWillGetAnError(); statement will not execute when being placed after the return statement.

It’s generally true that no further code is executed after a return statement. However, if the return statement is in a try or catch block, then the corresponding finally-block will still be executed if present. This may fit better into a try-catch-finally part, but I think I should mention it. [Source]

To recap, if you want to design a method that gets/fetches/returns a value, the method should have the return keyword inside the method like this:

*The standard/convention is get(), but I use fetch() to remind myself that the return statement is the key for returning a value, not what the method is named.

static members (fields and methods) belong to the class instead of an instance of the class.

It means that only one instance of a static field exists even if you make a million instances of the class or you don’t make any. It will be shared by all instances.

*static members can access instance members through an object reference.

[1]: Depending on the runtime characteristics, it can be one per ClassLoader or AppDomain or thread, but that is beside the point.

Version 1: this is a reserved keyword that is used to refer back to the current object.

Version 2: Java’s this keyword is used to refer to other constructors when it’s the first thing that’s called in a constructor.

Each non-static method runs in the context of an object. So if you have a class like this:

So effectively you use it for multiple things:

Let me show you how the “this” keyword passes along what it is referring to: 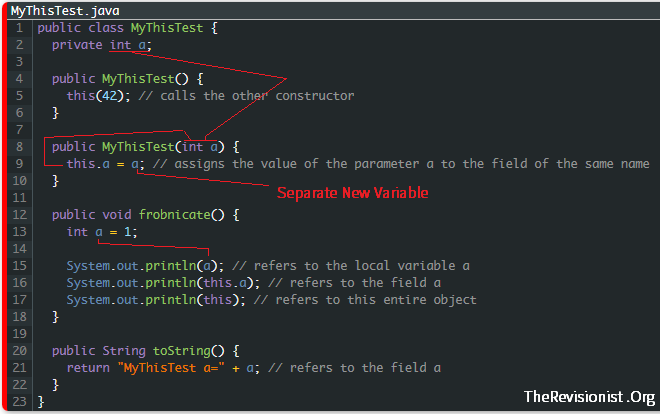 The super keyword is used to access members of a subclass inherited by the superclass from which the members appear from.

These keywords have a special meaning in the right context. But can also be used as identifiers.

extend: Extends list by appending elements from the iterable.

A method is a function that is bound to a class.

So what is a function? A function is a collection of computing statements and so is a procedure. So functions and procedures are the same in most programming languages. But In some languages; a function returns a value, but a procedure does not.

So what is a class? In conventional Object Oriented programming, a class is a collection of data (member variables) bound together with the functions/procedures that act on that data (like member functions or methods).

In conclusion, a method is a collection of computing statements that is bound to a class.

Object = An instance of class. In other words, class is a template for manufacturing objects. Again in alternative text, class is a blueprint that describes methods and variables in each object. One more time, an object is something, while the class is simply the plans for making that something.

A byte is composed of 8 bits. And 8 bits can represent up to 256 combinations. In unsigned binary this is 0-255 but in java primitives use signed binary which allows for negative numbers. The downside is that you can’t go as far in either direction because you are using one of the 8 bits to determine if a number is positive or negative you you only have 7 bits to work with. A signed 8 bit number has a range of -128 to 127 [Source].

By default, Java uses double to represent its floating-point numerals (so a literal 3.14 is typed double). It’s also the data type that will give you a much larger number range, so I would strongly encourage its use over float.

There may be certain libraries that actually force your usage of float, but in general – unless you can guarantee that your result will be small enough to fit in float‘s prescribed range, then it’s best to opt with double.

If you require accuracy – for instance, you can’t have a decimal value that is inaccurate (like 1/10 + 2/10), or you’re doing anything with currency (for example, representing $10.33 in the system), then use a BigDecimal, which can support an arbitrary amount of precision and handle situations like that elegantly. [Source]

An Integer is composed of 32 bits…

A short is composed of 16 bits…

Variables store data values to be used later in the Java program. Variables store values that can be numerical, alphabetical, or an action. Note that Variables are called “variables” because their values can be changed

For example in the code below, the variable radius is initially 1.0. But then is reassigned the value 2.0. You can see a similar reassignment of value for the variable area too.

The output shows the change of variable value:

Variables are for representing data of a certain type. So to use a variable, you need to declare it by telling the compiler its name as well as what type of data it can store. The variable declaration tells the compiler to allocate the appropriate memory space for the variable based on its data type. The syntax for declaring a variable is:

If variables exist of the same type, they can be declared together like this:

Notice that the variables are separated by commas. For example:

Variables usually have initial values. You can declare a variable and initialize it in one step. For example:

This is equivalent to the next two statements:

Another option you have is at the same time to declare and initialize variables together of the same type on the same line:

Assignment is to throw away an old value of a variable and replace it with a new one.

A declaration states the type of a variable, along with its name. A variable can be declared only once. It is used by the compiler to help programmers avoid mistakes such as assigning string values to integer variables. Before reading or assigning a variable, that variable must have been declared. [Source]

An expression represents a computation involving values, variables, and operators that, when taking them together, evaluates to a value. And…

A mathematical expression always returns something, but a Java expression doesn’t have to. Another difference is that expressions can, and often do, have side effects in Java. A side effect is pretty much anything that happens other than returning a value. [Source]

Concerning the the List Abstract Data Type in Java, the difference between nodes and elements is that an element is the data which is stored in the node. Another feature of the node is that it has a link to the next node. The link itself is not data. Rather, an address is stored as a link, much like a url or web address points to a website from a text link.